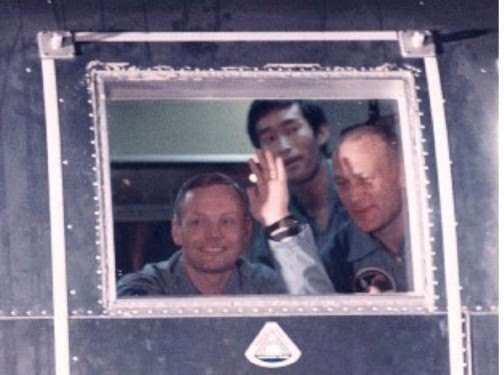 John K. Hirasaki drew the short straw and, in the process, won a job that put him front and center for one of humanity's greatest achievements.

Only four qualified engineers, you see, volunteered to expose themselves to any potential contamination found on the lunar surface, and Hirasaki (Lamar BS Mechanical Engineering 1964) lost the lottery. At the time of the Apollo 11 mission, Hirasaki worked for NASA's Landing and Recovery Division. He and his colleagues developed procedures to recover the spacecraft once it had splashed down in the Pacific and, far more dramatically, protect all life on Earth from the possibility of extraterrestrial bacteria or other potential hazards.

Beginning in July 1969, Hirasaki spent twenty-one days in quarantine with the Apollo 11 flight crew. During this time, he was tasked with processing and decontaminating the capsule, and he became the first person ever to handle lunar material as it was exposed to Earth's atmosphere. "When I opened the spacecraft," he recalled in a 2009 interview, "the smell was like Fourth of July after fireworks, there's that scent that you smell of black powder after firecrackers explode. It's also the scent—and this is the country boy speaking—if you strike two pieces of flint together…. I suspect what I was smelling was some slow oxidation or reaction of the lunar surface material with our atmosphere and humidity in our atmosphere."

This month we are highlighting Lamar's #lunarLUminaries to call attention to the varied contributions our graduates made to the #Apollo11 mission. Born in Vidor, Hirasaki grew up on his family's rice farm. "My education at Lamar," he explains, "was essential to being employed by NASA and having an opportunity to participate in the Apollo Program."