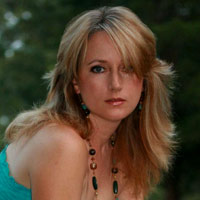 Jenifer Wrinkle is a Texas born singer and musician who followed in the footsteps of fellow SouthEast Texans Tracy Byrd, Clay Walker and George Jones to Nashville, TN where over the last 15 years she has forged her way through stiff competition to a level of success that put her alongside many of the greatest artists in country music.

Her impressive list of skills include singing, songwriting, guitar, violin and fiddle.

She has toured nationwide and abroad with Martina McBride, Trisha Yearwood, Joe Diffie and Reba McEntire, and worked with Tony Brown, Dann Huff and other hit producers on numerous country and gospel records. She is endorsed by McPherson Guitars, Gibson, DAda'rio Strings and Spiccato Bows.